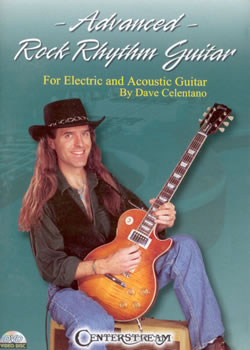 Flat pickers Delight! Dave is a flat picker. Electric and Acoustic. He went to G.I.T. There is a good pamphlet with easy tab and chord charts. Dave actually explains things! Hurrah! Thank you Lord!!

I would say that to get anything out of this 'advanced' guitar lesson your level had better be somewhere between the end of the beginning and the beginning of the end of guitar stage one facility.

Its not all that scary advanced is what is good about it. I want to play Rock after all.

Still you may not be ready for every one of these examples if you haven't put in some previous effort with scales and chords etc.

There are other places to go for that! Some of these lesson examples are easier than others and they aren't presented in that type of order. I would say Blues in B minor is the easiest - see menu below.

Dave takes us through this digital guitar lessons' 8 examples; a variety of styles/ways to use the flat pick instead of as some perhaps would finger pick in a Spanish or minor key is my favorite. He doesn't come out and say this but that's what he is doing and I, for one, appreciate it!

This is very nice if you are bored out of your mind by finger picking. I have spent hours doing it but its not my inclination since I play mostly electric guitar. Sometimes its even fun but on a nylon string guitar. OK I am a wuss. I am not going to put on plastic finger nails or grow mine long either not that that is mandatory.

That's why the 2nd example a Spanish style minor take on Malaguena, which is a lot like the Doors Spanish Caravan is of interest to me. Classical guitarists are trained to play in position and know their notes and that's why we are here ourselves, some of us anyway. But they usually finger pick.

Here we see how to get around that with a flat pick for better, not worse, or at least close enough for a minor blues with a lot of potential. Its also a David Bowie thing as in All the Madmen. The E/F tension anyway.

Life is what we make it, always has been, always will be. – Grandma Moses